I'm pleased to be part of the Nocturnal Nights Mother's Day giveaway...and because I'll be celebrating Mother's Day along with everyone else, I'm giving away an additional ecopy of both Moonlight Bleu and Crimson Sunrise.

Just leave me a comment with your email addy, and I'll let you know next week if you won a little extra
"you" fun! 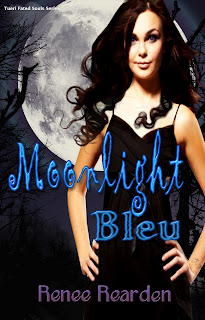 Saari Mitchell sees a psychologist in order to understand why-500 years later-she's still dreaming of her dead lover. Her shrink isn't helping, the nightmares come every time she closes her eyes, and the lack of sleep is interfering with her job at Sacred Heart Hospital. With her psychic ability to heal the human spirit on the fritz, her auric radar becomes as reliable as her spotty cell phone service.

By day, Dhelis Guidry works as a detective for the new Angeles Police Department investigating the missing or murdered women in the Full-Moon Killer case. In his spare time he hunts rogue vampires as a Tueri executioner.

Brogan Vincent is a Tueri healer. Though he could offer his miraculous talents to the rich and powerful, he has chosen anonymity and peace by only using his psychic abilities among the Tueri.

One look into Saari's tri-colored eyes and both men realize she is Tueri. One touch tells them each she's their soul mate. But can either of them protect her from the Full-Moon Killer? 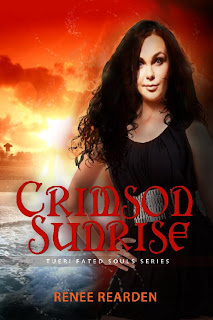 Saari Mitchell attends a Tueri conference in Las Vegas, Nevada to strengthen her bonds with Dhelis Guidry and Brogan Vincent—and see if they can make their three-sided relationship work. But when Saari and her vampire brother Mag’s lives are threatened, her trip to paradise soon becomes a surreal fight for survival.

Dhelis and Brogan’s psychic abilities are no help in finding Saari. Desperate to save their mate, they call in favors from the psychic and preternatural community, but the information leads only to more questions. Is the threat against Saari personal or part of a larger plan that threatens every human and Tueri’s existence?
Posted by ReneeRearden at 8:58 AM